Ready to run with the bulls?

If you are planning to run with the bulls at the San Fermin Festival, you already know the dangers these half-ton animals pose as they skid around narrow bends, charging forward with sharp, pointed horns. Participating in the encierros (morning bull runs) requires physical preparation, common sense and the desire for a once-in-a-lifetime experience.

The fighting bulls, which are carefully selected for their size, nobility and strength, run eight consecutive days — from July 7th – July 14th — during the festival. We offer these Pamplona bull run tips to help visitors prepare for a thrilling adventure they will not soon forget.

Signup for this life-saving guide

Get ready to run with the bulls online

We have created an online learning and networking platform that blends online courses on bull running with many networking tools that allow users to connect with other first-time and experienced runners. Material is highly interactive, including videos, quizzes and live webinars with bull running experts. This online course on bull running includes everything you need to know, in order to successfully run with the bulls and plan your trip to Pamplona. 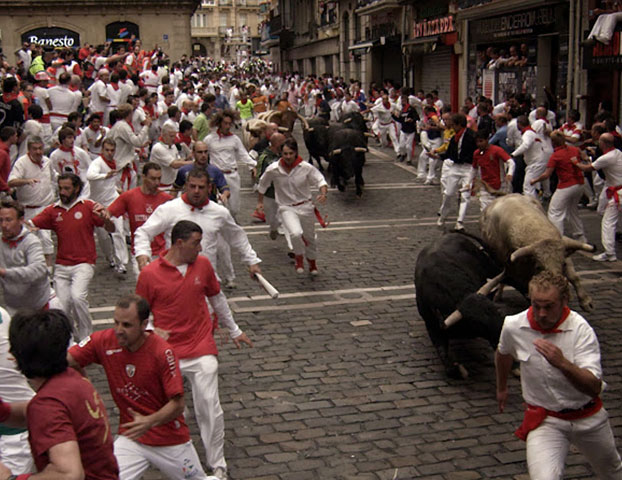 Many people think that the Running of the Bulls® is a straight shot from Corralillo Santo Domingo to the bullring. This is far from reality. One of the most important keys to success for runners is to understand the different sections of the Pamplona bull run route. Each segment has its own advantages and potential hazards, so it pays to familiarize yourself with each and then choose one to run.

Santo Domingo:  Just before the run begins, participants always sing a prayer to a figure of Saint Fermin, which is located on the Santo Domingo segment. This is the first and one of the most dangerous stretches of the route and is generally undertaken by only the most experienced runners. This section is somewhat short at 280 meters long, but there is little room for error as there is no shelter and the bulls are running very fast.

City Hall: The longest section of the race with more room and a stretch where it is easier to find shelter from trampling hooves and stray horns. The bulls typically run very close to the edge of the fence.

Mercaderes: This is a very treacherous stretch where the famous Dead Man’s corner is located. Severe injuries, gorings and tramplings are almost guaranteed on this section of the route. If you want to run in this section, know that this will curve to the right, near an area that is closed off.

Estafeta: Normally, after the curve at Dead Man’s Corner, the bulls are showing the first signs of fatigue. However, Estafeta is a long straight stretch at 300 meters, and the animals can regain some speed. You must be alert to your surroundings and keep your footing on the slick cobblestones. Experienced runners can maneuver and slide aside swiftly without falling or hindering other runners.

Telefónica and Callejón: By the final stretch of the route, the bulls are marginally slower. Keep your eyes peeled for bulls that have separated from the rest, and if you happen to fall, roll to one side and stay down or take refuge by escaping through a hole in the wall. At the Callejon, the passage narrows considerably, putting runners at risk of being trampled in a pile up as the bulls push toward the stadium, known as the Plaza de Toros.

How fast can a bull run?

Bulls can move surprisingly fast, with the top speeds clocked in at 35 mph. At the Running of the Bulls, the average speed of the herd hovers between 15-20 miles per hour, which is still quicker than most people. Bulls are nimble and intelligent beings and can outrun humans in most situations.

If you’re a beginner runner, it’s imperative to appreciate the bulls’ speed and agility and never underestimate the dangers involved.

How long is the Running of the Bulls?

From start to finish, the Pamplona bull run route is approximately 875 meters (2,870 feet). Most of the bulls can run the route in three to four minutes, but record paces have made headlines in recent years. In 2017, two of the bulls from Jandilla Ranch reached the Plaza de Toros in just two minutes, 13 seconds.

More tips for Running with the Bulls: