The 875-meter bull run route snakes along narrow streets through the Casco Viejo (Old Quarter) of Pamplona. The bull run map looks short enough, but bear in mind that these centuries-old streets are riddled with hazards for both runner and animal. There are sharp right angles, perilous slopes, uneven pavers and a tricky bottleneck at the end where the beasts are funneled into the bullring.

The route is distributed along three main streets in Pamplona: Santo Domingo, Mercaderes and Estafeta. 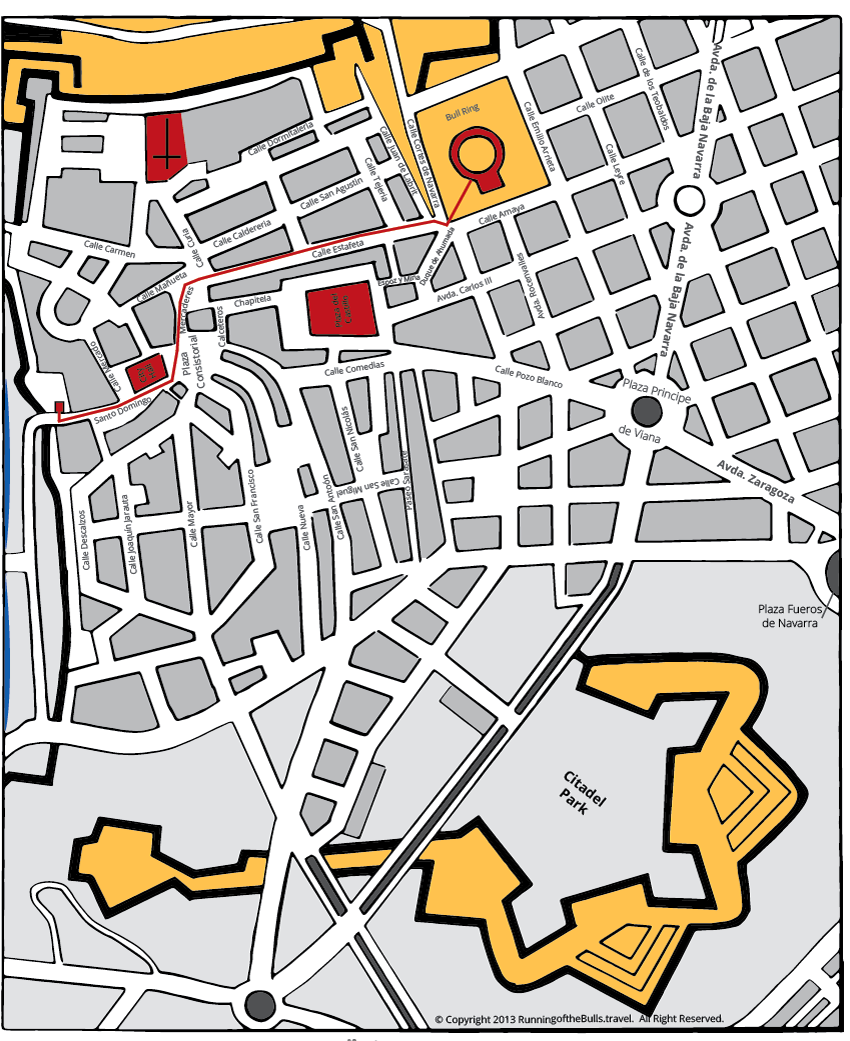 The Pamplona bull run begins at the bottom of Calle de Santo Domingo, a sloping street that is hemmed in between ancient stone walls. This first section of the bull run spans 280 meters and is widely considered the most dangerous. Why? Because the bulls are fresh and full of energy. Once they blast out of their holding pen, they are breathing down the necks of the runners in a matter of seconds. The street has a slight uphill incline, enabling the bulls to run at lightning speed, propelled by the shouts and chaos of the crowds.

Also known as Plaza Consistorial, this second stretch of the route is flatter and slightly wider as the path crosses Plaza del Ayuntamiento, which feeds into Mercaderes. This section is roughly 100 meters long, and about 9 meters wide. The herd slows down marginally as the road makes a slight left bend onto Mercaderes street. The beasts tend to brush along the right side of the fence, giving runners a decent shot at making a fast exit on the opposite side if need be.

This section of the bull run is one of the shortest and most perilous. The route takes a hard right at the end of Mercaderes as it turns onto Estafeta Street, also known as “La Curva.” It is here that runners are encouraged to be extra careful as the bulls are pushed outward toward the barricade by their own inertia. Getting caught between animal and wall could spell serious injury or death. This hard bend is called “Dead Man’s Corner” for good reason.

This is the longest and most famous leg of the bull run course, spanning some 300 meters. After Dead Man’s Corner, the street straightens out, allowing the bulls to gain tremendous speed. It is virtually impossible to outrun the horned beasts on Estafata. Every year, the bulls routinely overtake runners who don’t clear the way. Veteran runners know the importance of sliding aside quickly, without impeding other runners or catching a rogue horn.

This is the last stretch of the run, and while the bulls may be somewhat slower, statistics demonstrate many serious incidents in the area leading up to the Pamplona bullring. This section is about 100 meters long and passes in front of the Telephone Exchange building (Telefonica). The route gradually narrows into a tight corridor, only 3.5 meters wide, known as the Callejon. A dangerous bottleneck forms as the bulls push forward to the arena – the Plaza del Toros – where they will fight that evening.

Thinking about joining El Encierro? Get prepared and stay safe by visiting our Pamplona Bull Runner’s Center that outlines important facts, official rules and training opportunities. If you are interested in watching instead of running look into renting a balcony for the bull run.