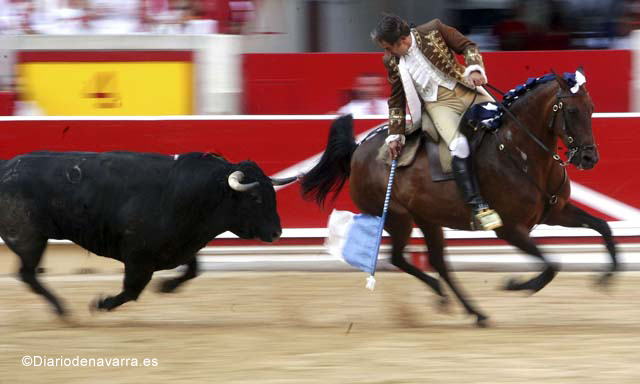 Many people traveling to Pamplona think that there are bullfights the entire year, but in Pamplona they only occur during the Running of the Bulls™. From 7 to July 14 you can attend traditional bullfights, but only on the July 6 can you enjoy the Rejones, a special bullfight where the bullfighter rides a horse.

I can boast of having not missed a single Sanfermines my entire life, but it was only three years when I learned that traditionally bullfighters were on horseback and not on foot. On July 6, 2010 my father, who is a big aficionado of bullfighting, asked me if I would accompany him to the Rejones. I accepted and after seeing the first bull I understood his enthusiasm for bullfighting.

To achieve this confrontation, the bullfighter demonstrates his level of skill, first his riding abilities, and also his quick reactions to the bull.

At the beginning of the bullfight, the horse and rider were circling the bullring, and suddenly, the Toril (The door where the bulls are) opened. Both the horse and bullfighter automatically changed their attitude and stood in front of the bull. The bull stood there beautifully with all five hundred kilograms of its body pulsing with energy.

The fighter caught the bull’s attention and started a chase. You constantly have the feeling that the bull has grabbed the horse, but it instead the horse swiftly made three hundred and sixty degree turns at the most unexpected moments.

That day I went to the Rjones with my father I also had the opportunity to see Pablo Hermoso de Mendoza, a famous Rejoneador of Navarra, who is currently considered the best Rejoneador in the bullfighting world.

If you have time, do not hesitate to attend this event, full of tradition, showmanship, and emotion, that takes place every July 6th at 6:30PM at the Plaza de Toros in Pamplona.